Section 169A of the Clean Air Act provides for a visibility protection program to protect scenic vistas in 156 of the country’s federally managed wild areas, including national parks, wilderness areas, and wildlife refuges. Visibility in these wild areas (called mandatory Class I federal areas) is impaired by fine particulate matter generated from man-made sources. The fine particles scatter and absorb light that would otherwise reach the eye of an observer, thereby reducing visibility.

US EPA calls the impairment of visibility “regional haze”, which is defined in 40CFR51.300 as “… visibility impairment that is caused by the emission of air pollutants from numerous sources located over a wide geographic area.” Visibility impairment is defined as “… any humanly perceptible change in visibility (light extinction, visual range, contrast, coloration) from that which would have existed under natural conditions.”

In Georgia there are three mandatory Class I areas: 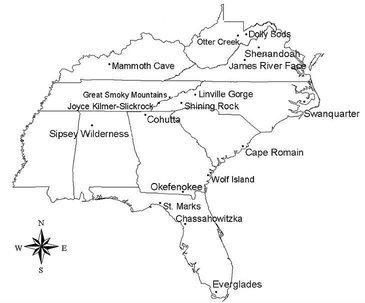 Georgia's State Implementation Plan For Regional Haze (Narrative)  and is focused on the reduction of SO2 emissions from point sources, primarily coal-fired boilers at power plants and industrial facilities. Emissions of SO2 gas form fine particle pollution (sulfates) that can impact visibility at distant Class I areas.

Progress towards the current ten-year reasonable progress goal is documented in Georgia’s Regional Haze Periodic Progress Report. Based on measurements collected through 2010, the visibility in Georgia’s Class I areas shows significant improvement (i.e., less impairment) compared to the baseline period. See the table below. Installation of additional controls and the retirement of selected coal-fired power plants will result in additional reductions of SO2 emissions prior to 2018. Georgia EPD expects that these additional reductions will lead to the achievement of the reasonable progress goals for visibility in Georgia’s Class I areas by 2018.

**The regional haze requirement for the 20% best days is to maintain the visibility impairment at or below the baseline (2000 – 2004) impairment.