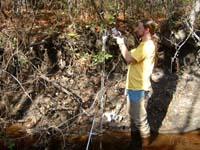 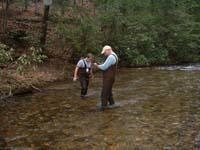 In the early 2000s, Columbus State University (CSU) was contracted by EPD's Watershed Protection Branch to develop macroinvertebrate metric indices that would take into account the ecological differences of Georgia’s subecoregions. Using land-use GIS data, CSU delineated watersheds across all gradients of human disturbance (from least impacted, or reference, to the most heavily impacted) for second- to fourth-order streams statewide. Streams from across the gradient of human disturbance were sampled and analyzed from each of Georgia’s subecoregions. Using the sampling data CSU developed, 24 discrete metric indices, including one tidal index. To go along with these indices, a standardized numerical scoring system was developed, which can then be translated into a five-step descriptive classification system that ranks a stream’s health as very good, good, fair, poor or very poor.

Currently, biologists from the Ambient Monitoring Unit (AMU) in WPMP are working to determine criteria for listing streams on the 303(d) list for impaired water bodies based on macroinvertebrate biology data. Each year, AMU collects new site data to help increase the ability in which the classification system is able to discriminate all environmental gradients. AMU also periodically returns to randomly selected sample sites to gather more data for environmental gradient discrimination and to monitor possible changes due to human disturbance or restoration efforts. 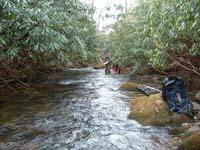 Future projects include evaluating possible differences between drought and non-drought conditions and differences between clear-water and black-water streams that occur in the same subecoregion. Other future projects include developing additional biological criteria and methods using periphyton (attached algae) as indicators and coordinating AMU data with Georgia Wildlife Resources Division (WRD) fish data to get a more complete picture of biological integrity and ecological function of Georgia’s streams.

The MS Excel spreadsheets and associated documents are compressed into a separate ZIP file for each subecoregion.